Fundamentals of the databank were already laid in the research project VaV 610/01/99-1.2 (1999-2001) entitled “The analysis of forest ecosystems in the system of existing small-scale particularly protected areas aimed at the system optimization” . The project produced a broad base of the Databank in the form of optimized network of so called forest small-scale protected areas.

The actual implementation of the Databank started in a research project VaV 610/6/02 (2002-2004) – “Research and gathering of knowledge on the condition and distribution of natural forests in the Czech Republic” . It resulted in the first nation-wide census (2004-2006) by the respondents, i.e. evaluators of the forest stands naturalness, from administrations of national parks, protected landscape areas, regional offices of NCA and FMI and the divisions of Military Forests of the Czech Republic, s.p.

The project continued within the research project VaV SM6/153/05 (2005-2008) “Monitoring of the development dynamics of natural forests left to spontaneous development; preparation of methodology for the selection of areas with communities meant to be left to the effect of mostly natural forces, proposal of methods and procedures for the management of these areas” . It included creating sumary outputs, a web www.page pralesy.cz and making legislative bases for the codification of forest naturalness assessment – first in the Notice No. 60/2008 Coll. and then in the updated version in the Notice No. 64/2001 Coll.

Since 2008 the online-system of the Databank has been updated in cooperation with Central Register of Nature Conservation (within NCA). The data about forests naturalness are annually updated from the forest management plans processed in the previous year. This activity was carried out by our team in the years 2008-2011 through mandatory contracts between the Ministry of Environment and VÚKOZ, v.v.i. Since 2012 we have conducted it on our costs. Summary results of the updates are published annually on the page Summary data.

HISTORY OF CZECH FOREST RESERVES NETWORK
TERMINOLOGY
DATA CREATION AND MANAGEMENT
Historical influence of forests on the territory of the Czech Republic dates back before the first surviving written records. The first extensive deforestation occurred probably in 8-9th century in the southern and central Moravia during the peak of Moravian Empire. Similarly, with gradual colonization of Bohemia, namely Czech basin delimited by the lower Elbe and Vltava rivers were also extensively deforested. During the Middle Ages, hilly regions and uplands were gradually colonized. Greater need for firewood and new requirements for wood as a material for building and mining lead to a strong devastation of forests and further deforestation in some regions, especially in central Bohemia. 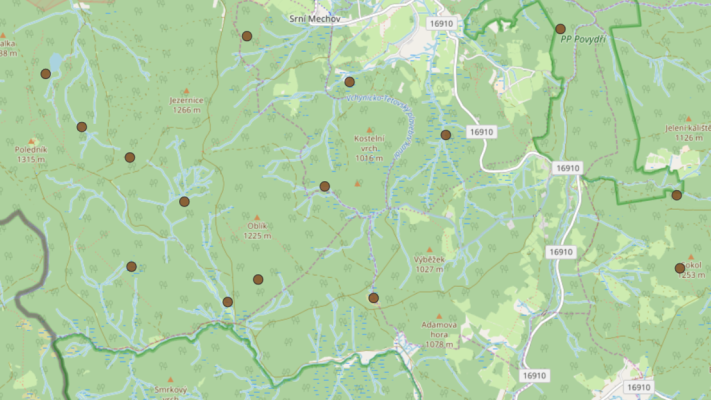 Different approaches to the care of specially protected areas (SPAs) regardless their category represent problematic and fully unresolved issues. This is valid especially for SPAs on land designated for forest functions. Different approaches of the owner/manager of the SPA often interfere with the nature conservation authority whose views on the management of the area are binding. These differences stem from different “view” at the forest and its mission, e.g. concern about the impact of negative care for the SPA on surrounding, often unstable production forests, different understanding of the subject of protection in a SPA (e.g. gene pool protection versus allowing spontaneous development processes), etc. The aim of this section is to define briefly and with respect to practical use basic distinguishing features of “naturalness” (i.e. degree of human influence) of forest stands that are included in SPAs. These definitions will serve as the basis for initial decisions about further management of the area or rather as the foundation for conceptual decisions in nature conservation and forest management.